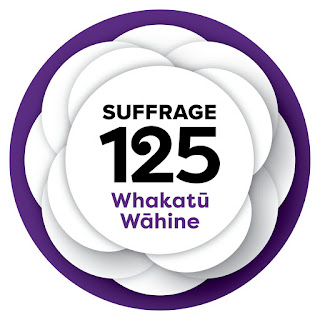 This year is the 125th anniversary of New Zealand achieving women’s suffrage, celebrations and events are happening around the country to commemorate this progress in women’s rights. “We are the first country in the world to give women the vote” is a statement that gets repeated to elicit a sense of national pride, to provide evidence of how progressive New Zealand is as a nation, ahead of everyone else. When I learn about the struggles of suffragettes and the signatures on the petition being held at the National Library with Te Tiriti o Waitangi and He Whakaputanga (The Declaration of Independence), I can’t help but feel conflicted.

I want to respect and acknowledge all the women, and especially Māori women who participated in the struggle for women to be able to vote. They often don't get as much recognition as the Pākehā leaders. Kate Sheppard is on the $10 notes but we don't see Meri Te Tai Mangakāhia memorialised in the same way. It didn’t sound like an easy journey but one that was full of sacrifices and it was significant as a basis for fighting for gender equality.

The suffragette movement is a sobering reminder of how patriarchy and misogyny were largely colonial impositions in Aotearoa. But 125 years later, there is still a long way to go for gender equality and social justice, particularly for non-Pākehā women in Aotearoa and I think the issues of racism and connections with colonisation need to be highlighted more.

Firstly, let’s think about the often unspoken erasure of the racist history of the settler colonial political system, of which voting is a part of. Settler colonialism is a form of colonialism that takes control over land and people through mass settlement of the colonisers’ people to form the majority of the population, which is what has happened/still happening in New Zealand, Australia, US and Canada. The system of politics that dominate and hold the most power is a settler colonial government - a major breach of Te Tiriti o Waitangi which only allowed for 'kawanatanga' for Pākehā to govern themselves but not over Māori.

Initially, when the British set up a government in 1853 the criteria for who could vote were:
The fourth point excluded many Māori men who did not hold individual titles to land from voting. However in 1867, the four Māori seats were established, which meant Māori men could vote regardless of their relationship to land ownership, but only for the representatives in the four Māori seats. This was not even proportionate to the population at the time. If democracy works by majority rule, it’s easy to come to the conclusion that this was a form of tokenism to restrict Māori representation.

This is settler colonial democracy in action. Until 1976, Māori could only vote for the representatives on the Māōri seats. There were four Māori seats and it was set up in 1867 as part of the Māori Representation Act, but think about it, four seats - and how many seats are there in parliament? How can Māori have any equal decision-making power?

Even today, in theory, all citizens and permanent residents have the right to vote in the NZ elections. However, prisoners cannot vote. No matter the length of your sentence, if you are in prison at the time of an election, you cannot vote. And who makes up the prison populations? Disproportionately, it’s Māori - 51% in men’s prisons, 58% in women’s prisons. We should all know enough about institutional colonial racism by now to know that this is not a coincidence, nor is it because Māori commit crimes at higher rates than other groups. The police have already admitted to their “unconscious bias” and the courts give longer sentences to Māori compared to non-Māori.

There is still no universal suffrage.

From 1893, the majority of women were able to vote, but Chinese people (of all genders) were not allowed to vote in New Zealand until 1952, because of their “alien” status. This is almost 60 years after the suffragettes achieved voting rights for Pākehā and Māori women. Chinese people weren’t allowed to vote because they weren’t allowed to become citizens of New Zealand between 1908-1952, this is over 100 years after the first Chinese person arrived. The structural racism in the New Zealand immigration system has denied the rights accorded to people based on this Pākehā idea of citizenship, or “naturalisation” as they called it. This is often omitted in accounts of how “we” were the first country to achieve women’s suffrage.

For a long time, the unofficial white New Zealand policy was a way of keeping non-white people out and bringing in white settlers, thus cementing the settler colonial regime. If the government boasts a progressive system of democracy, where the majority rule, you can manufacture that majority through mass white immigration. Nowadays, it’s still much easier for white people to migrate and meet the immigration requirements than people of colour.

At the end of the day, these voting rights only allows us to choose representatives to an illegitimate colonial government. Never in the history of democracies, are you given the option to vote away the government. Having women’s suffrage, while gaining some legal recognition of a form of gender equality, the equality gained is the participation in a settler colonial democracy. Yet these changes have also been hard won.

We often hear “New Zealand is the first country to give women the vote” stated to evoke nationalism. These kinds of nationalism are always problematic and dangerous. To use women’s rights and feminism, to present a progressive image of this country, masks the ongoing injustices of gendered violence and structural inequalities against non-Pākehā women in particular. Having been part of the migrant anti-domestic violence movement, I can name so many life-destroying decisions by the Family Court and comments by judges that will prevent you from sleeping at night. Under the colonial immigration system, a migrant woman was deported back to her country while she was in a coma due to injuries suffered at the hands of a Pākehā man with NZ citizenship. Racist and misogynist violence is still rife and it is institutionalised in NZ’s policing, prison, legal and court systems.

Being born in China, where nobody has the vote, and when the last time students and workers called for democracy ended in bloodshed, I want to acknowledge how hard achieving suffrage for women was. I mean, voting rights is definitely a step up from having no political power or living under a dictatorship. At the same time, we can't ignore how it also plays a part in maintaining gendered and racialised concentrations of wealth and power, and the ongoing structural racism related to suffrage such as the disenfranchisement of prisoners.

If voting rights is a measurement for a recognition of humanity - it is still not universal. The dominant narratives of the Suffragette movement often ignores the histories of those deemed outside the imagination of the nation-state. This is a challenge to think outside of the square, question how much power voting actually gives people, and how this system can still be manipulated to maintain systems of oppression through 'majority rule'. We need to ruminate going forward, is participation in this settler colonial democracy really going to bring about liberation for all women?