Tomorrow, exactly 20 years ago, was the Tiananmen Square massacre 1989. This subject is all over Chinese radio at the moment with interviews with different people who were there at the time and discussions with Chinese immigrants in Auckland. When I was listening, there was a featured interview with an American guy who was there the time and one of the questions was, "How did the Tiananmen Square massacre change America's perception of China?" While it's good to be aware of how the event is perceived by people, it was really strange putting an American in an expert position about the event. It would've been much more interesting to hear the perspective of the student organisers or the workers' who were there in support - what they're experiences and memories of it were, how they see Chinese politics today. As most of the student organisers have been exiled, it would not have been hard to get in touch with one of them.

Even though I was still in my mum's womb when the massacre happened, I feel like it is part of my history and the June 4th movement was an inspiring act of defiance, mobilisation and worker-student solidarity. I have a family friend who was there at the time, swept up by the movement when he was in university. I've heard lots of stories from him, about the hunger strike, about the politics and organising around it. It was an anti-corruption and anti-authoritarian movement for democratic reforms and it started off with a hunger strike in the square. Students from all over the China participated in it, not just from Beijing university. Our family friend was studying at Shanghai university at the time and there was a lot of mobilisation there and students traveled to Beijing to participate.

The massacre explains the fears of many Chinese people to engage in anti-government activism, and it is definitely part of the reason why my parents are so concerned with my involvement activism that challenges the state and the status quo. Likewise, my grandparents, aunties and uncles think the same. After learning about what had happened, it all makes sense now. People were traumatised by the massacre, a lot of parents had lost their only child. To me, this event epitomises the sheer violence that the state is capable of in maintaining its power over the people, and that is why I believe authoritarian communism as an alternative to capitalism is ultimately counter-revolutionary.

A couple of years ago, I visited Tiananmen Square for the first time. I was overwhelmed by the vast flat space filled with tourists lining up to see Mao's embalmed body, the "People's Liberation Army" training nearby and wandering around in their uniforms. It was a strange feeling being in a space with so much history and that the light-grey concrete was once covered with students' blood. The irony of statues and moments symbolising working class and peasant struggle was too much to bear. But it was like that revolutionary spirit materialised in stone froze it in history, therefore was a thing of the past. In this new age of postmodernity and neo-liberal capitalist China - woops, I mean "Socialism with Chinese characteristics", it symbolised the death of the revolutionary spirit of the oppressed. The generation who have been through all that struggle and turmoil now are saving all their pensions for health care, medicine and future medical treatment as no medical care is free. Some of the ex-soldiers of the People's Liberation Army are living quite well with a high pension, but ex-factory workers are still getting the bare minimum. What an insult the current system is on all those people this "dictatorship of the proletariat" was suppose to benefit. 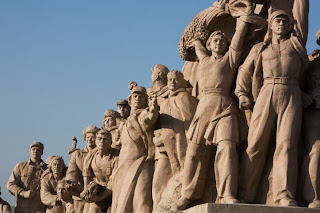 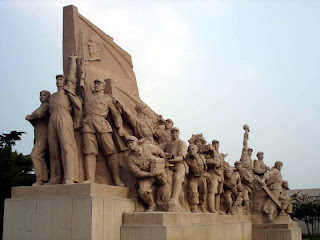 For a general overview of the Tiananmen Square protests, this is an interesting documentary: