It's everywhere, not just the explicitly racist Hell Pizza billboard that read "At least our brownies won't eat your pet dog". On Friday, there was a demo at a Hell's Pizza on Quay st where a spokesperson for Hell Pizza in charge of advertising came and talked to us. He was a white guy wearing a suit. Protestors were asking confrontational questions and he was given a right of reply to all the questions asked. But some of us heckled him as he spoke. He started off with trying to justify the ad in the name of humour and couldn't understand how it could be seen as racist. For a report of the action see here.

Looking at the message in the ad itself, it's such a typical form of racism that people shouldn't be so surprised about. It's so normal in a racist society that skin colour or race becomes associated to activities, behaviour of actions deemed 'uncivilised' by white supremacist cultures. For those that don't like to watch corporate media, the billboard was made in reference to a Tongan man who was caught frying up a dog on his barbeque. The fact that he was called a "brownie" in this ad, made it about race. It was connecting a whole group of people with brown skin to eating dogs. Personally, as a vegan, I don't see eating dogs as any less horrific to eating cows, chickens, sheep or pigs. But you'd never see an ad making fun of white people for eating any of those animals or drinking milk from another species. I still remember the stereotypes of Asian/Chinese people being cat and dog-eaters and the look of disgust from people against this practice when they talk about it, but would happily consume a dead chicken's body in their sandwich for lunch.

Another ad my friend pointed out to me as we were walking up Queen st the other day was an ad for Jeanswest advertising "Authentic Japanese Denim". 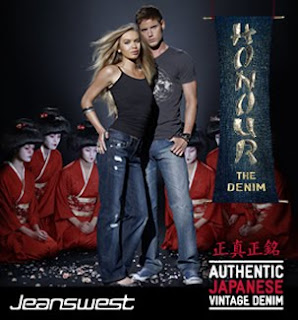 The actual images in the shop were slightly different to this one, the man and the woman was on separate banners and the man was surrounded by Japanese men bowing to him. The one of the white woman had the same circle of Japanese women bowing and kneeing around her. It's such a telling image of a racist colonial white supremacist ideal of race relations. White people standing in the centre while Japanese men and women bow and kneel around them, positioned much lower with their many bodies subservient to them. They are situated on the outside, used almost like decorations while the main focus are on the idealised bodies of white men and women. What a fucked up colonial fantasy re-produced to sell jeans. It's such a blatant image of European superiority while appropriating Japanese culture and projecting a western ideal of "authenticity" onto another culture. When images like this are still in the mainstream, it can be taken in two ways. It can reinforce white supremacist ideology or it can evoke opposition because of such a blatantly racist composition that can easily be deconstructed. I think images like this are at least more honest about the reality of relationships between cultures, and they show how corporate brands use non-western cultures to make profit. Gotta love 'multicultural' capitalism.
Posted by Bamboo at 9:02 PM