They're everywhere. But where're the cool ones at?

In this article, ms.stellar takes Hebdige's theory of subculture and applies it in her encounters with Asian migrant individuals in Aotearoa, involved in activist communities or independent non-capitalistic work. She aims to highlight a cacophany of sentiments, shared by but not often discussed amongst activist wimmin circles in Aotearoa. There are no (f)actual names, or places, as she writes in the loose context of personal experience. 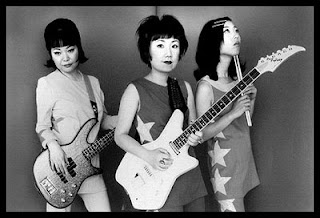 Shonen Knife, defunct Japanese all-girl punk rock trio began it all for me.

Notions of cool, manufactured in popular culture, play some bearing on self-determined activist communities. Whether we like it or not, we're influenced by the objects that pervade our senses - in the streets, on the Internet, in the papers and particularly amongst the people we meet. With the increasing occupation of social networking sites such as Facebook and Twitter in our thoughtspace, our notions of what's cool, what's 'in' and 'out' are challenged radically. We become judgmental to the way people write about themselves, what kinds of music & books they read, how articulate or inarticulate their political sensibilities are. Face it - if not for the lure of confident rebellion, playful oppositional practices and the promise of self-empowerment that counterculturisms project, we would not be what we are right now.

Whether it's being acknowledged properly in activist communities or not, is yet to be discovered. What I do know is the premise of any subculture, that Hebdige (1979) writes as 'the meaning of style', is something we can access to make sense of how we think of each other - us, being Asian wimmin amongst the wider multicultural migrant network (which essentially operates as a subculture in various ways) and us, as migrant wimmin participating in social change for Aotearoa.

What is Cool?
Hebdige (1979) basically wrote in his book 'Subculture the Meaning of Style', that insofar subculture posits itself as an opposition to the values and beliefs system of the majority, its sustenance and substance is driven by a commune of like-minded individuals. The signs, rituals and objects of 'style' can be perceived as creative expressions of this shared oppositional sentiment. Hence, if we were to contextualise left-wing Asian wimmin as a subject minority in the migrant community, I suggest that their existence and resistance in itself calls for a subculture.

Now, before I go further, I should state that I consciously assume 'Asian wimmin' as a homogenous object. Firstly, I regard myself as a member of this imagined monolithic. My intention here is to advance a personal belief that regardless of the unique ethnicities that make up what we now regard as 'Asian' in Western knowledge, there are certainly common expectations that we oppose, at least amongst the people I've met. Some of these expectations are:

- societal capitalistic ("We came here for the chance to make money"/ "what for do art?")
- societal heterosexistracist ("Get married here/ have kids here / for the good of our future generations, marry our own kind")
- societal cultural practice pressure ("Shame on you for not knowing your native language / cooking traditions / history")

Let's assume that the majority of the migrant community share the above sentiments in one way or another. How would Asian wimmin with left-wing political leanings, or interest in non-capitalistic pursuits react? On one hand, the migrant community in itself, though predominantly still patriarchal, offer support mechanisms through familial networks, and a space to exist within the larger Aotearoa society. On another, in order to pursue our interests, we'd need to form new ties, and prove allegiances with social connections, amongst alternative movements whose larger interests aren't always very culturally-sensistive to begin with. How do we know whether the subcultural 'meaning of style' holds the meaning we want to express as Asian wimmin? And more importantly, what avenues are available for us to create Asian wimmin's explorations of style, contribute reinventions of 'cool' towards social change?

The arts, the media - these are possible spaces for Asian wimmin to form meaningful subcultural practices. Some of us make music in punk rock bands. Some of us are zine-makers and writers. Some of us are photographers, sketch artists and make T-shirts with political slogans. But as these are ultimately pre-designed, pre-existent practices in subculture, are we limiting ourselves? Are we merely buying acceptable notions of cool within the subculture... just so we can carry on with the show, to 'fit in' and be 'cool'?

On that note, as migrant wimmin of Aotearoa, it does mean that if we are serious about any collective effort for social change, we may need to really think about insight/input from those not within subcultural social circles that we are actively part of. It's a bit of a balancing act, I must say, and not always resulting in positive results. I've met a Croatian migrant womyn who have tried to gain support from her relatives and migrant connections to form a diy label for crafts and jewellery, which would also house hobby projects for refugees and new migrants. This was generally well-received but like anyone in capitalistic Aotearoa, they saw themselves as investors, which made it very frustrating for this womyn. I've also experienced a time, myself, inviting a few activist Kiwi folks to watch a documentary about Muslim women and online discussions about the veil. To my knowledge, unless they were academics, many still haven't and have very little interest to engage in dialogue or work about something they do not know much about. "Well, then let's read about it. Maybe it gives us a better understanding about all those war protests we love to talk about?" Not much response.

So are we just being too cool for school?
The reality is, that regardless of how much we want to believe that our subcultural communities are 'cool' in terms of doing the right thing the left way, and passionate about social justice, we need to admit that insider participation is not always the answer, and cannot always be relied on.

The questions remain: can we, as current or aspiring social change participants, take a lead in forming a unique subculture in the context of a multicultural, globalised Aotearoa New Zealand? Can we create a system of prioritization, that is non-hierarchical in principle, in order to execute ideas, interactions and initiatives that is relevant to us as Asian wimmin without isolating the insights of our larger migrant community? Can we migrant wimmin, re-define what's 'cool' for Aotearoa, and is Aotearoa ready for such a renaissance to take place?
Posted by batik at 4:58 PM