Mellow Yellow caught up with them to find out how it all came to be.

1. Sydney Decolonise Punk Fest. What's that all about and why is MPM going along?

ss: I guess, being a POC band awakened from the nightmare of colonisation, the initial attraction was the word "decol" in itself. It helped when a friend who visited from Melbourne at Auckland's Decol hui in Feb 2012, recommended that we should totally play decol punkfest. That, plus the notion that Australia was willing to engage in decol politics, was, we thought, something pretty radical to begin with.
So in a nutshell, MPM went along because we assumed that the festival organisers regarded 'decolonisation' responsibly. We thought it was all these punk bands coming together to relate what decolonisation means to them.  We even half anticipated to "tolerate" white privileged acts thinking decolonisation is simply about being "anti-racist".
(...well little did we realise how horribly naive that was!)

2. There's been kerfuffle on the FB grapevine about Sydney Decol Punk Fest being a bit of a white guilt token gig, where are you all on that train of thought?

ss: Yeah as we mentioned before, we weren't too sure what we were getting into. I guess, we desperately wanted to believe that there would be at least one or two or a few people of colour and indigenous folks who have put all this effort and are challenged by a lack of participation from people of colour communities, that they resorted to leveraging off white male privilege, to make an epic thing happen. And then we read the FB stream of comments between various entities (some of whom are friends based in NZ whose politics we're in tune with) and we had a shock of our lives!..  So much internalised racism, and colour-blindness, denial even,  it was all a bit too much to read.. But by that time, our hard-earned flights were booked, and we were just focused on playing our music we figured, look, for what it's worth, when else would we, a self-identified poc hardcore feminist punk band get to play a festival in Sydney?     Let's just roll with this and if nothing else, show em' what decolonising punk sounds like! 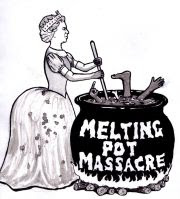 3. Say “asian girl music” and people might think of pan pipes and canto pop. What's MPM all about?

ss: HAHA interesting isn't it that asian immediately triggers imagery of sino/east asian firstly! Anyway we chose punk as a genre to begin with and started using it more of as an attitude to various noise-rock genres per se...although, let it be known that some of us in the band are FANS of cantopop birl groups too (thanks to karaoke4lyf)!
On a serious note, MPM collectively identifies as genderqueer, of 1.5/2nd generation migrant backgrounds, based in Aotearoa with roots from Asia.. if in a word, we identify as people of colour as a whole, which is a relatively new term in (post)colonial language I guess, but it does aptly address the fact that  we each hold and carry a mix of historicities through our ancestry, heritage, and familial ties through our diasporas...     I guess too often our subjectivities are constantly negotiated depending on which city, scene or people surrounding us... so in that sense, claiming as POC gives us the autonomy to position and re-position our sense of self and identity without having to constantly educate others/ justify our politics.

mz: It's also great outlet for our pent up rage that we're so often taught to just internalise.


4. Asian feminist punk music isn't exactly mainstream. How did you all get into it?

ss: well it all started with mz and I hanging out on weekends, youtube'ing vids of asian hardcore punk bands like King Ly Chee and My Precious. we were both toying with the idea of dual screamo and just experimented screaming and growling for fun! And then it got to the point when we just had to give it a good shot, get some other female friends we know play instruments, and get it started. We were all really mucking around, until we wrote our first song 'Welcome', realising that “shiit we got this sound”.
Months later, mz and me wrote and rough-recorded our second song "Behind Closed Doors" and we took the risk to just scream every single word and record it with distortion in our mate's garage. We liked what we heard. So we just kept doing more noisy stuff I guess. Having said that, we really wanted to incorporate all sorts of influences, and be "real" in our music, so having a punchy pop edge is important to some songs. I guess it's all about how we choose to deliver our message, rather than whether it reaches to mainstream or underground audiences..

mz: Shasha and I have been into punk music from a young age and we've both been in punk bands before, but I think we've have similar experiences and thoughts on the white-dominated punk scene in Aotearoa. I got into punk music at a young age cos I was sick of all the apolitical bubblegum stuff that a lot of my peers were into, and I was attracted to the attitude of defiance and rebellion against the mainstream dominant culture. But punk music was mostly played by white men and the punk scene reflected this white male dominance. When I first got into punk, there was a lot more anarcho-punks and willingness to be involved in radical politics, but soon I got disillusioned when more punks dropped out on activism and I started seeing shit in the punk scene that reproduced societal oppressions. I felt really alienated cos none of the music reflected my experience and there's such a eurocentric subcultural way of being that is so image-based it just didn't work for me, so I withdrew from the 'scene' and focused more on anti-racist anarcha-feminist stuff.  But if there's one punk ethic that we can owe the beginnings of this band to is DIY: "do it yourself" or "do it together".    There's no other asian feminist punk band in Aotearoa at the moment and we wanna see more so we just had to do it ourselves. 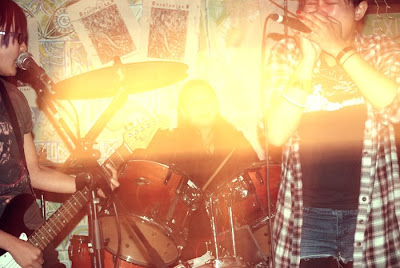 photo courtesy of ej tapnio.
Posted by dumpling at 9:15 PM