On 6th February 2010, a group of Asian activists will stand under the banner ‘Asians Supporting Tino Rangatiratanga’ to commemorate Waitangi Day on Treaty Grounds.

What's that all about? Asians don’t have anything to do with all that stuff. That’s a Maori and Pakeha thing isn’t it?

The Treaty of Waitangi 1840 is considered the founding document of New Zealand as a nation. Despite this, it continues to be of heated debate exclusively between Maori and Pakeha peoples.

As tauiwi (non-Maori/non-tangata whenua) living in Aotearoa, we recognise the past and present injustices against Maori/tangata whenua peoples.

We also recognise the benefits from British/Pakeha colonialism and theft, that we instantly have access to, whether we have been here 5 generations, or arrived two minutes ago. They are the privileges and benefits of living in a wealthy colonised nation. The "freedoms" that come from colonisation, the "opportunities", the "standards of living", exist, and are available to new migrants, old settlers and their descendents because of the wealth and opportunities created and maintained by colonisation.

We know that as Asians living in Aotearoa, racism exists everywhere. Racism not only works to disadvantage ethnic minorities and tangata whenua, but it also works to divide us through negative racial stereotypes.

We choose to seek paths of justice that do not simply partake in further injustices against Maori/tangata whenua.

We choose to look at social justice and our responsibilities, not solely from a /Western/Pakeha perspective, but from ancestral perspectives where our elders have experienced colonisation, imperialism, and perpetuated these injustices also, which continue to have impacts on sections of the Asian population.

We do this so we don't have to hand on legacies of grievance and injustice to our children and grandchildren, as has been handed to us as tauiwi settlers, migrants and citizens.

These are the reasons we are supporting tino rangatiratanga.
Posted by dumpling at 9:39 PM No comments:

Why I sometimes like to watch Bad Action movies.

So I really like watching Action movies. It’s usually the same simple plot, with a different buff Good Guy hero, and different bunch of Baddies.

The basic plot for those who don’t watch Action movies, goes like this.

Goodie is doing its own thing having a normal life, or is a Cop, someone in the Armed or Special Forces, or a Spy for the Greater Good of the World and Humanity. He’s an all round nice guy, has a nice girlfriend/wife /nice family.

Then suddenly, either a Baddie kills his girlfriend/wife /family, for no reason (just Pure Evilness) or because Goodie’s For The Greater Good armed organisation has gotten too close to exposing or stopping the Evil of the Baddie’s operations.

Whatever the reason Baddies has killed Goodies loved ones, Goodie is now very upset and will do a montage of working out at the gym, practicing its boxing or zen martial arts and being very upset (not crying though).

Then, because Baddie has killed Goodie’s loved ones, anything Goodie now does, like hacking into databases illegally, beating up naughty underworld crimesters for information, blowing up cars, running away from Cops or other agencies with three letter acronyms, or killing other Baddies with just one bullet or one lethal punch, is Completely Okay and Totally Justified because Goodie is Seeking Justice.

So the movie ends with Goodie doing all the above things, that if normal people or Baddies do them, are Bad or Evil things. But it is ok for Goodies to them those things, because it’s Goodie Seeking Justice and then Winning against Baddie (who is usually killed by Goodie in the Big End Fight, unless they want a sequel, and then Baddie will instead go to prison or fall off a cliff and you think baddie is dead until the sequel). Goodie then gets a new lady (usually one he saves during the justice/revenge sequence) and feels happy again.

Joining the dots: some thoughts on alliance-building 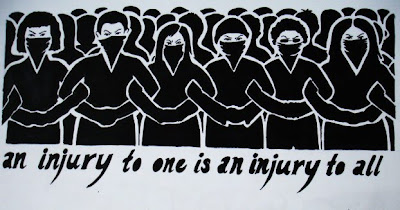 I've been thinking a lot lately about ways to achieve total liberation for all - for animals and the earth as well as people and what that entails. Currently, in Aotearoa, movements for radical social change seem to be really isolated from each other. There's pockets of activists all working on different things and attacking the same system on different fronts but little effort is made to build alliances and bridges between struggles that can potentially bring down this oppressive system if we all work together.

There is a lot of truth in 'strength through unity', despite it's Orwellian connotations. Perhaps a better slogan way of saying it would be "strength through solidarity". But I think before this unity/solidarity can be effective in fighting all forms of domination, internal hierarchies and privileges need to be addressed and people need to be open to being challenged on oppressive behaviour which is naturalised through ideological justifications. 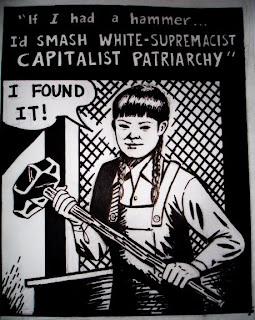 Posted by Bamboo at 4:13 AM No comments: