Disbanding Melting Pot Massacre: Some reflections on being in an Asian feminist punk band

But I like to think of it as transforming the nature of our musical relationships with each other. Opening it up. More fluidity rather than fixed band members and instruments. I am both sad about the end of the band as it was and excited about the possibilities of creative directions for the political messages we want to convey and express. But I want to reflect on what it meant to be in/part of a band, more specifically an Asian feminist hardcore punk band. 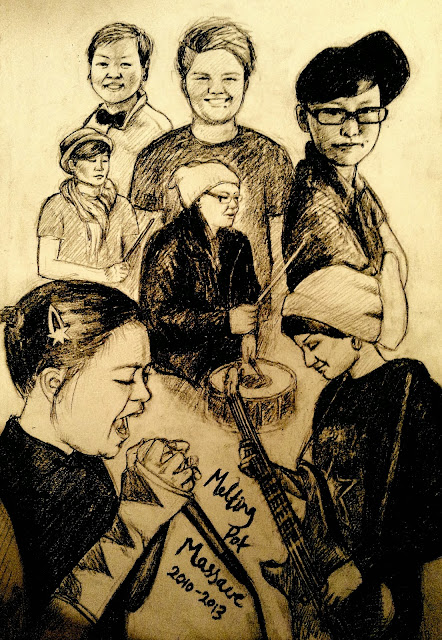 For me and Shasha, we’d both been attracted to and involved in punk scenes, played in other bands. I’d been in an anarcha-feminist riot grrrl band with white grrrls called Hysterror, then it was renamed Mad Bitcher. But before that band, I remember answering an ad online for a guitarist when I was 15 and it was two white cis-boy punks and when I met up with one of them in person, they were surprised and had thought that I was gonna be a guy and seemed quite disappointed. Later, they never made an effort to even have one jam with me. That was my first experience of sexism/racism/ageism in almost being in a punk band.

I’ve always felt quite alienated in the punk scene in Auckland. I wasn’t into drinking, smoking or taking drugs. But I was attracted to the politics of punk and the spirit of rebellion and resistance in the lyrics of the punk bands I was listening to: Crass, Zounds, Propagandhi, Choking Victim, Contravene etc. I got into more political punk music through pop punk which was being played all over the radio around the early 2000s with Blink 182, Good Charlotte and Green Day. Feeling like a misfit, their music was easier to connect with than the mainstream poppy love songs at the time. With the war on Iraq and invasion of Afghanistan happening, I got involved in activism and there’d be punks on the demos. The first person who introduced me to anarchism was a punk kid at a protest to free Ahmed Zaoui. I started going to local all ages punk shows and became friends with some of the more political punks, the crusty anarcho-punks. In general, the bands that were around in Auckland weren’t all that political then and pretty much all white men. I think the Coolies and the Quims were the few women-led bands that were around but the Coolies disbanded not long after I got involved. I still remember their set on International Women’s Day in 2005.

Despite the assholes I came across in the punk scene, the gigs and music helped create some sense of community and solidarity among young people getting into punk or activism at the time. They provided a social space for political discussions hanging out outside in the middle of the night breathing second-hand smoke in between bands. Those were the days of police raids of shows with pepper spray, sometimes arrests, lots of questioning, and people were beaten up on demonstrations. These run-ins with the law enforcers exposed me only partially to the extent of police violence and brutality. Though these were shitty experiences, it strengthened a sense of solidarity and community for those of us that were politicised.

The more my analysis became shaped by feminism and anti-racism that challenged the class-centrism that universalized white men’s experiences of capitalism, the more disillusioned I became with the dominance of drunken and sober sexism, homophobia and racism. It wasn’t really my community and could never really be. Even though I’d been associated with the punk scene in Auckland for maybe 9 years now, when we started MPM, it felt like we were by default on the outside, trying to work out where/if we fit in. We had good shows, bad shows, fucking amazing shows and played with fucking awesome bands we really admire. But that sense of community and connectedness wasn’t really there.

The experience of being in a band beyond the ‘punk scene’ has meant a lot to me. To be able to play with other people of Asian diasporas with similar politics and be angry and scream from our standpoints was something I never got to do before. I could write lyrics that my bandmates would get. If I was in a white person-fronted band, it wouldn’t work for them to be singing it. Music is so personal/political. Not just the contents of the lyrics, but also the form, the per-form-ance and the process of creative production. Being in a band is like being in a relationship with all your bandmates, you have responsibilities, negotiations, conflicts – but there’s something really magical when you’re jamming and the sounds, rhythms just gel and move together (like sex!). You lose yourself in the music and forget you’re the ‘individual’ that neoliberal ideology convinces you you are.

Some songs can take ages to perfect but with “Migrant and Refugee Solidarity Song”, we jammed it out in one session, we just did it together without even really speaking. It’s not like you just hear the song, but you feel it and make it at the same time with the whole of your being. The sense of collectivism in the creation process and during the performance where everyone has an equality crucial role to play that is really different to say, rapping alone to digital beats, spoken word or making a speech. It’s that interdependency and collectivism of being part of something beyond the sum of individuals involved is so missing in other forms of social interactions. This aspect of being in a band is amazing, and the post-performance highs can be epic, leaving you buzzing and unable to sleep. Then there are also the lows and I’m glad I was warned about them early on.

We encountered a lot of challenges as a band, some were fairly predictable but still disappointing. The DIY music scene, largely being apolitical don’t tend to try to understand us or what we’re about. Like the typical migrant situation we had to learn and understand their (sub)culture to navigate it but there’s rarely any consideration of if that should also maybe happen the other direction. We can fill a token slot, make the punk scene appear to be all accepting, multicultural and pro-feminist, but never get our politics taken seriously unless we kick up a fuss about it and then we’re expected to do the educating on privilege and complicity 101. Gets super tiring.

We’ve been silenced and had our agency over self-representation denied ‘cause some white folks didn’t get a joke about ‘reverse racism’. We’ve had other people of colour attack us for naming whiteness, as if that’s racist. We learnt that an influential person in the music scene was a perpetrator of gendered violence and have cut all connection with them.  We’ve had to defend ourselves for not wanting to play shows with homophobes. We got a lot of shit and defensiveness from people who just didn’t get it.

We’ve also had invaluable support from our friends, flatties and allies. Without them we couldn’t have done what we did.

What’s interesting is that as a band, we have connections and identify with so many different communities and movements – feminisms, anti-racism, anarchism, decolonization, queer and trans liberation, migrant communities, animal rights, anti-capitalist student movements, and yet never neatly fitting into any of those movements and often alienated from our own communities. This did give us opportunities to play to very different audiences but for most shows and festivals, it never felt ‘at home’. Except maybe our first show that we organized – “Decolonise the Mic” as part of the Decolonise Your Mind hui. Best audience ever!!

Being in this band with all the previous and existing band members before the disbanding has meant so much to me. It made me feel less alone in the fight in the struggles for liberation and equality. We reached people and met people in ways we wouldn’t have otherwise met, and got to know people in ways we could only do through music. We’ve built new relationships with people through performing, organizing and just being/having a presence. Those are the connections that matter and will last beyond the band.

I still feel partially connected to punk because it played an important role in radicalizing my perspective of the world. As a genre of music, we really owe it to the African-American brothers who formed the band Death before any white punks bands existed. What I really like about punk is that you don’t have be good at your instruments, you can still make music and say things in your own way without feeling like you haven’t met some sort of professional standard. And I’d fucking love to see more feminists of colour pick up a guitar and start a band. Maybe then can there be a community of us. I think we all just want to feel like we belong somewhere and it’s especially hard where you can never feel fully comfortable in any established communities, and at this point, I know it’s not a place I will ever “find” but a place we have to make for ourselves.

I think music has a special place in social change and revolutionary movements. It’s certainly been part of altering my political consciousness. And we will continue to create, just not in the same way or form. For us to create in a world where all that is important is constantly destroyed or under attack is a way of fighting back. To create is to demonstrate that the systems of oppression can never destroy or control our hearts and minds. Your voice, your expression, art, performance, words are important, especially if you’ve been taught to hate yourself – for being a girl, queer, trans, non-binary gendered, non-white, indigenous, an immigrant, a refugee, unemployed, working class, classed as “crazy”; if your love and care for all animals and the earth has been trivialized or ridiculed. When you speak, make music, write or create, it’s a political act in itself. 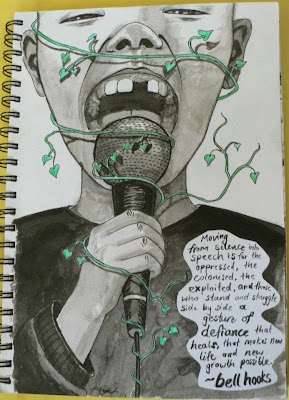 You don’t have to wait for someone else to come along and speak your thoughts and experiences for you, that day may never come if you don’t do it yourself. That’s why we existed.
Posted by Bamboo at 1:43 PM 2 comments: